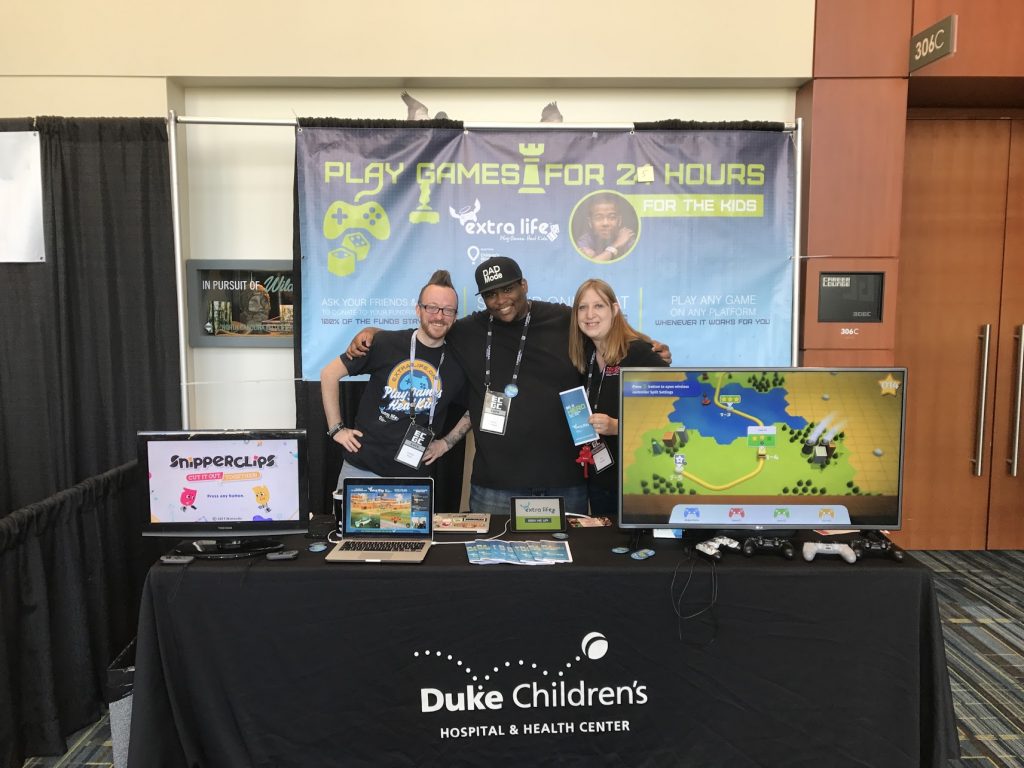 I found a parking spot in Downtown Durham. It was super cold outside as I made my way down the street. I was heading to a meeting that I and a few other like-minded individuals were invited to for a new opportunity.

While we all had something in common, I knew none of these people. As an Extra Lifer, I was only aware of the crew I gamed and raised money with based in the Maryland area. I had no idea there were a group of us in the Raleigh-Durham area, let alone North Carolina at all.

Once I got to the building, I tried opening the door. It was locked. I could see that there was a reception desk behind the second set of doors, but no one was sitting there. To the right of me were a big set of windows. The lights were on and I could see what could easily be 20 people in there talking and having a great time. I tried my best to get their attention. I screamed. I yelled. Ultimately, it took me turning on my flashlight on my phone and waving it around to finally get someone’s attention.

Honestly, I’m not sure what caused me to stick around that night. I was living in Durham at the time and could have just as easily went home. But I didn’t. I was somehow compelled to stay and see what this “guild” program was all about. As someone who believed in Extra Life, I wanted to do more. But, to be perfectly honest, ever since college (read: ever since my friends moved away and I dropped out), I didn’t really have any friends. Normally, I keep to myself. Its less painful that way. I thought this might be a way to change all of that…

Over time, we’d begin to joke about the door incident. As I was late, they go over bits and pieces about the guild program and what is expected of us. And that’s what scared me. This was a group of people who would help fund raise for Extra Life, we were gathered to recruit. We were to go out to various events and actually talk to random strangers.

That started feeling me with dread. I stayed quiet. I hoped that maybe with all these people in here, someone else would step up, do the recruiting and I could just reap the benefits while saying I was doing something. I couldn’t have been more wrong. Apparently, more people felt stronger about the social aspect than I did and immediately went ghost. After being in the guild for four years, I don’t think I’ve ever seen them once since then (including our first guild president).

A month had passed and we met again. The room was noticeable smaller as they didn’t need to remove the divider for what were more like 10 people sitting around. The riff raff was gone. I couldn’t hide anymore. I actually had to step up.

With that in mind, we started making plans for our first recruitment outings. Since we were relatively new on the scene, we went to the one place were we felt like we’d be welcome, Game Stop. I forget what game was coming out that month, but we were going to be in stores signing people up to join Extra Life.

They started asking for volunteers and like some fool, I rose my hand without thinking. I could only think to myself “This was what I wanted to do. It was going to be okay. I’ve got this.”

I was assigned to a GameStop that one of our guild members used to work with and had good connections with the management. I met up with my partner and met the management and we talked about what was going to happen. I played some demos and talked with those two for a while.

Everybody was starting to pour into the GameStop. Each looking just as disinterested in everything as the next. They were only focused on one thing. Picking up the game, leaving as quickly as possible, and playing said game. No time for upsales. No time for new preorders. Definitely no time for Extra Life.

This terrified me. As much as we all had a common interest in gaming, not everyone believes that. Some people on play Madden and don’t consider themselves gamers because they only play one type of game. This was the crowd I thought I was dealing with.

Without that connection and a with a huge fear of rejection, I shut down. I just stood there, walking around, not saying anything. My partner was doing all the work and all I could do was try and cower in a small store.

Then, I don’t really know what happened next. Something came over me. My partner could have said something to me. I honestly don’t remember. The next thing I could remember was getting signup after signup. Joking with everyone in line as if we were at some huge reunion and I had known them for years.

The following meeting, my partner was just singing my praises. I didn’t understand why because I was hiding in a corner for a the beginning. It was at that point that I realized that I could actually do this. I just needed to figure out some way to tap into it.

Over the years, I have refined my technique. Between the Guild program and my wife, I’ve become more outwardly confident. I’ve become better at hiding the many anxieties that I may be suffering with. I have routines that I do before events, food that I eat, music that I listen to, and teams that I work with.

When you see me at events or on stream, that’s me, but not all of me. After all that I’ve done in the public eye over these past few years, that guy standing outside of the building in the cold is still there. Still wondering if he should just turn around and go home. I always wonder if anyone actually notices the effort I’m putting in. While I know what the answer is, it doesn’t change the fact that there is something always in the back of my head telling me “I’m wasting my time. Nobody cares. Nobody gives a shit!”

I think lately I’ve been stretched too thin and these thoughts just escape through the cracks. Things are looking good on all fronts, but because so much is working, there is more for my mind to attack. I’m getting better at controlling these new levels of stress, but it ain’t easy. I never expected it to be. I am just glad that there are things and people in place that help me sort it out.

For those reading this, I’m not saying I have the answers. I’m the furthest from it. What works for me may not work for you. Shit! It may not even work for me later on and I’ll have to adapt again. I just want to let you know that what you see is not always what you get. Things will get you down and may seem like they are coming for you, but if its what you want, stay hungry and go for it. If anything, always ask for help. You’d be surprised that when you say something, even if it sounds tacky and cliche, there’s at least one person who can help you.

You’ve got one right here…