The Xbox One Elite Controller Pushes All the Right Buttons 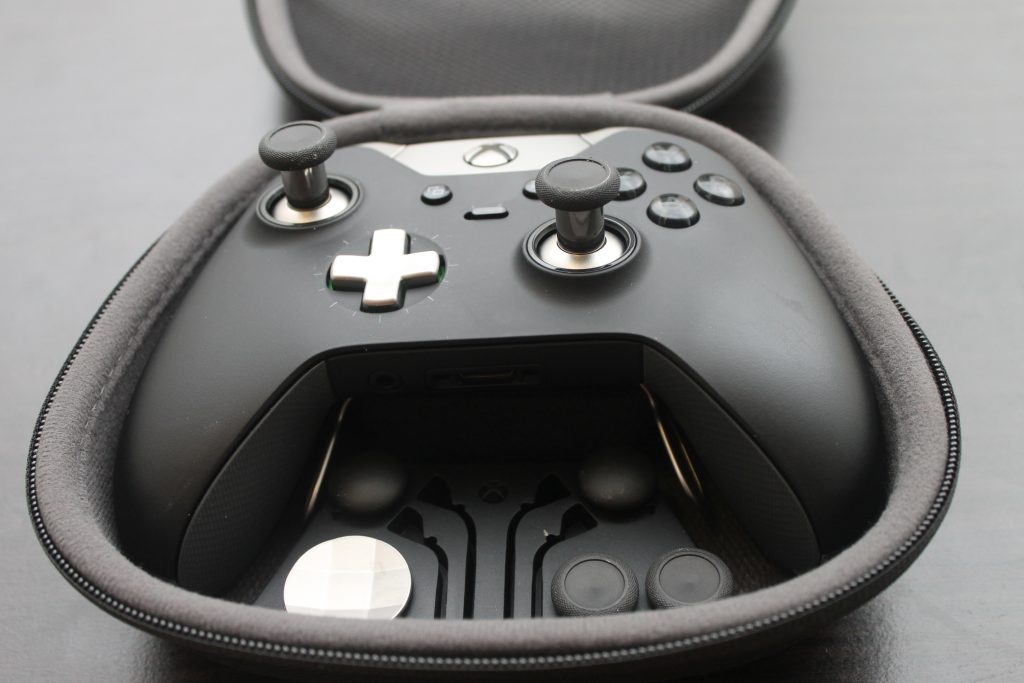 I wonder if that’s what Microsoft was thinking when they set out to make the Xbox One Elite controller. This controller has it all! An Xbox One Controller! A second Xbox One controller by way of a swtich! And double buttons!

Okay! Okay! I know that most of this isn’t true, however the controller is a real premium device. The look and feel of the device to me is a lot better than its pack-in counterpart. There is a removal of color to make it feel a little bit more professional. Also, the back of the controller has a textured grip for those intense sessions.

The Xbox One Elite controller feels as if you have the ability to change controllers on the fly by using a switch in the middle which will change a controllers button layout. You can set up these profiles in the Xbox Accessories app on the Xbox One and then assign these accessories to one of the two switch positions.

But what can you actually customize? Well with any Xbox One controller you are able to actually customize the button layouts to whatever you want. However, with the Elite controller, you are now given the ability to essentially duplicate buttons onto four removable paddles on the back of the controller. And when I say buttons, I mean buttons. You can map any face or shoulder buttons to the paddles. You can map triggers, D-pad positions, or the click of either stick to these paddles.

The one thing I wish you could do is map them to actions that don’t have a button. One specific example I have is when playing The Division Beta, when switching to your sidearm, you have to tap the Y button twice. I would have liked to have mapped the double Y tap to a paddle so I can just tap once to get to my pistol.

About these paddles though. They are a very helpful addition to the controller.  It allows you to keep your thumbs on the sticks and use your idle middle and ring fingers to perform these tasks for you. The one issue I have, though, by no fault of the controller, is that these buttons can get in the way of you picking up the controller. Lightly pressing one can trigger an action like clicking into a menu if you were paused or throwing a grenade if you weren’t. If you aren’t planning on using them, the buttons are easily removable or could be configured in a variety of ways that may help alleviate the issue.

Not only are the paddles removable though, you can switch out various other parts of the controller. The D-pad is can be easily replaced with a circular thing that I have no idea what its used for. You can also replace the sticks with taller ones for more precise movement in shooters or convex ones similar to what you would be used to on PlayStation platforms (granted the PS4 kinda went the best of both worlds on the DS4).

There are also switches on the back of the controller above the paddles and below the triggers that control how far the triggers recede into the controller. This made it easier for me to control weapon firing when using automatic weapons in game where “spray and pray” won’t get the job done and you are looking to be a little bit more precise.

And speaker of triggers, if we go back to the aforementioned Xbox Accessories app, you can also set were the “dead zone” of not only the triggers but the thumb sticks for the perfect feel.

With all this controller and all the buttons it comes with, you will need something to store it in. Luckily, Microsoft thought about that and packs in a textured hard case for the controler. At the bottom of the case sits a little compartment where you can place the sticks, D-pad, and paddles you aren’t using so you won’t lose them.

The controller also comes with a braided microUSB cable, but I’m not sure what for. It may be to plug the controller into the PC. Ultimately, it could be for charging the device, but you will still need to buy a rechargeable battery for the controller in order to get that functionality. Microsoft obviously sells a battery but it comes with its own microUSB cable. This isn’t a problem for me because I could use more cables, but I imagine it may be a headache for those who may not want to keep up with them all. That being said, I do like the braided cable as that’s what I tend to buy when I need replacement cables anyway.

All in all, the controller is pretty good. It was enough to make me reevaluate where I’ll play shooters and if I’ll actually play more of them. However, for the price $150, it was a huge risk for something that I wasn’t too sure about. I had held the device before but never got to play anything using it, so for it to pay off the way it did, I’m really relieved. I can also see this as me probably trying to justify making such a huge purchase.

But then again, what do you get the man that has everything!