You gotta love Twitter.  When people have gripes, they take to the social networking site to air grievances and you never know what will happen next.  This time, something great happened.

Before the weekend, SwiftKey launched their “Flow” beta to the masses to much excitement and, reportedly, much confusion.  Many people were wondering what was to become of the new feature.  Was it to be its own app? Was it to be a feature-add to the existing SwiftKey 3?  Personally, I was expecting it to be its own app even though I would have loved it if they just added it to its existing keyboard.  It wouldn’t hurt as the “flow” keyboard looks and acts just like their latest available keyboard.

Thankfully, one brave Twitter soul gathered the courage to ask SwiftKey what was on everyone’s mind… 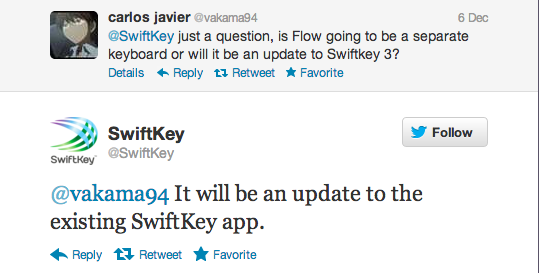 I think that is excellent news for everyone as it doesn’t warrant a brand new keyboard purchase.  For one small, but very intuitive feature.  I think this will also give SwiftKey a leg up on Swype, the keyboard that made this style of gesture-based typing popular years ago who is still operating in beta.