First, I would like to start off with Happy Nexus Day everyone.  I hope that everyone that wanted to get a new Nexus device got what they wanted to today.  Of course, I know everyone didn’t as the Nexus 4 sold out almost immediately.

With that being said, there was another piece of awesome that was rained down upon the most recent Nexus devices today. Android 4.2.0 was bequeathed to us from Google. The update is rolling out to users of the Galaxy Nexus (I believe GSM only right now), the Nexus 7, the Nexus 4 and the Nexus 10 (the latter two receiving final versions of 4.2).  If you aren’t patient enough to wait for them to roll out to your device of choice (like me), here’s instructions from QBKing77 (my personal favorite when it comes to working with my Epic 4G Touch) on how to manually update your Nexus 7.

So, after updating my tablet and it booting for the first time, you will encounter the whole “Android is updating” screen as it is updating some files and applications as it includes a new Gmail app and YouTube app from what I understand along with a broken Google Voice app (can’t seem to add a new contact to a message).  Once that’s done, you’ll be brought to the lock screen (provided you have that set up).  The changes there are apparent starting with the clock. The hour is now in bold with the minutes being (I guess) regular. Tapping on the clock will surround your unlock area in a box.  After unlocking it, it will take you to the new clock app which has been redesigned.  The app looks really good and I feel like I will be using it more and more.  I like how they implemented a third-party timer app into its own interface. I now feel like I wasted $1.

Going back to the lock screen, if you scroll to the left, you can see a greyish box with a plus in it. This is where you can add widgets.  I have five apps (four of them from Google) that support that feature.  I tried pulling up the Calendar widget, but no data actually loaded into it so I’m not sure what happened.  The third-party app, Falcon, which is widget for Twitter works just fine.  You can get it from here.

Speaking of the notification drop-down, it also has been updated.  Its easier to flick it down and it actually stay down, at least in my opinion.  In Android 4.1.2, I had make sure I dragged my finger all the way to a certain spot on the screen to make sure the drop-down stayed down. 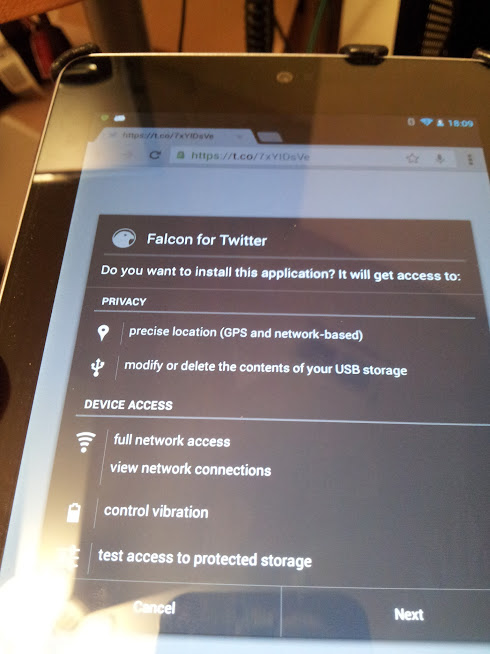 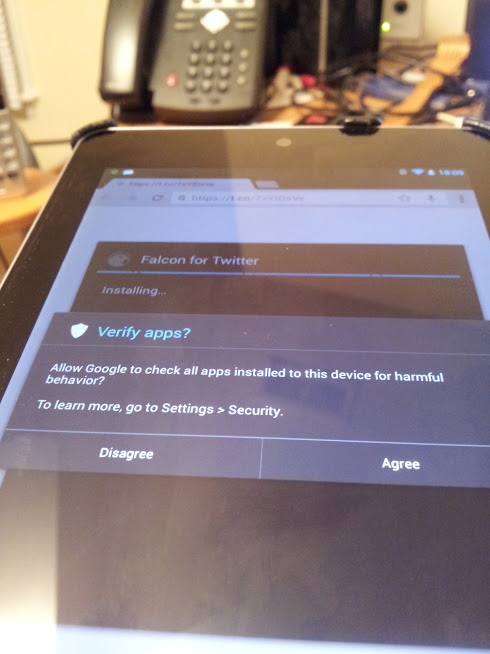 The installer is another thing that has been updated.  While installing things from the Google Play Store haven’t necessarily changed, sideloading applications have changed.  The app permissions don’t take up the entire screen anymore.  Also, the new Google app security took effect when I ran the sideloaded apk installer.  I’m not sure if the message would have popped up while installing an app from the Play Store.

The most talked about feature was also included in this update.  Multi-User accounts solves the problem of having a shared tablet.  Accounts can be switched from the lock screen by clicking a small circle close to the bottom with the account holder’s photo in it.  Once you have multi-user accounts enabled, the photo that appears in the Quick Settings serves as a sort of “switch user” button and will take you directly to the lock screen to allow you to switch users.  I haven’t been able to actually use this feature as I can’t seem to get my fiance to remember her Google credentials and didn’t want to make a new Google account to create the secondary account on the device.  From what it looks like, however, it doesn’t seem like you can keep the other user from manipulating things on the device such as apps and what have you.  It seems as if they can share the apps already shared on the device, but I doubt that will transfer over into their Google Play account and allow them to download apps you bought on their devices.  It seems the only difference this allows for is logins.

From what its looking like everywhere else that I read, I may be the only one who has noticed some kind of degradation of service from applying the new update.  Even from those who have applied the update the way I did, I may be the lone wolf in noticing that swipes and taps don’t register when they should.  When playing around with it and trying to get the Quick Settings menu to appear, it refused to and the notification bar and on-screen buttons just “crashed” on me before showing me the menu.  I’ve also had a couple of apps taking longer than expected to load up, but they had just been updated, so I’ll give them the benefit of the doubt.  Maybe it just needs a reboot.

For what its worth, it seems Android 4.2 has bought some welcome changes to the Android mobile operating system.  However, I feel like this would have been better received by me if it weren’t for the leaked builds and other blogs and websites telling me how it was going to behave as opposed to what its doing at final release.  Again, without owning a Galaxy Nexus or Nexus 4 (or even a Nexus 10, for that matter), I don’t know how these changes translate elsewhere at the moment.  All I know is, is that in the 5 years that Android has been around, I’ve seen it come from the ugly duckling to the belle of the ball and this latest update seems to be a step in the right direction.