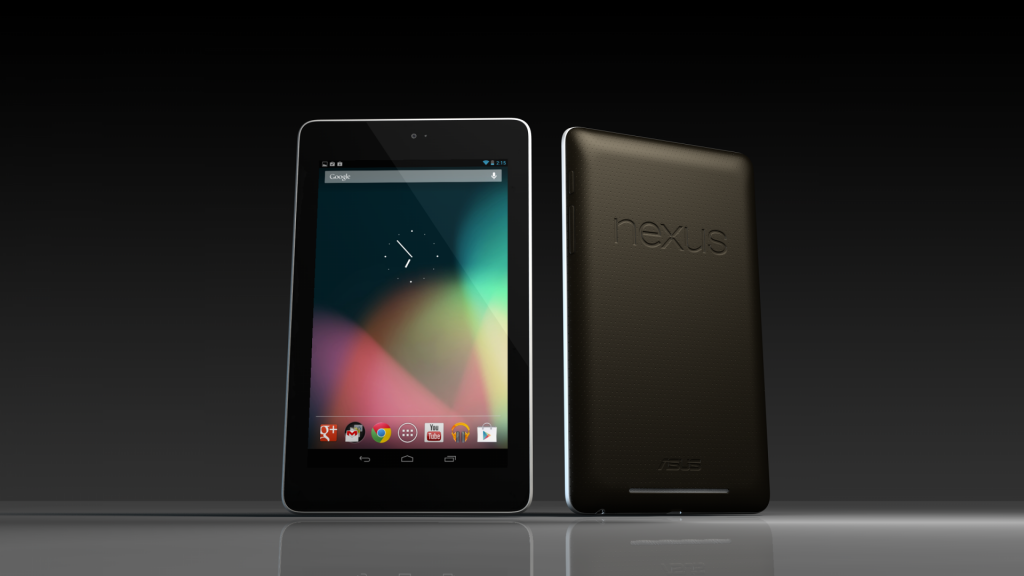 The Major is back with another review.  Finally coming out of my writing hiatus (and my vacation, and my job, and all the tech that I’ve  acquired and moved), I have a wonderful piece of technology that I think you all are going to love, if you haven’t already loved it.

Today, I present to you, the Asus/Google  Nexus 7 tablet.  This 7″ tablet (where it gets half of its name from), running the latest Android operating system (4.1.1), is the flagship tablet from Google (also known as the Nexus line of products (i.e.: Nexus One, Nexus S (4G), Galaxy Nexus)).  This tablet was built so that Google can show other manufacturers how tablets could and should be built.  And quite frankly, I’m inclined to agree with them.

I like to set the mood with a little setup.  As you know, its kind of difficult to find these bad boys in stores.  The best way to get it is by ordering it from the Google Play Store.  There you can get both the 8GB ($199) and 16GB($250) variants.  If you can find one in a brick-and-mortar store, you’re only going to find the 16GB models.  Luckily, that’s the one that I wanted.

The device that I possess was purchased from my local GameStop.  If you are going to purchase one in a store, it doesn’t help to call ahead so you don’t waste a trip.  I was lucky to purchase the “last one” in their store (although, when I arrived, the clerk told me that they may have had more in some boxes that were sitting in the store).

Where should I start?  The Nexus 7 is pretty much the best decision for anyone who would like to compute around the house and actually see the data without having to take huge machines (read: laptops) everywhere you go.  Not only can you see the data, but the Nexus 7 can present it to you fairly quickly.  These things have a Nvidia Tegra 3 System-on-a-chip (SoC) chipset which includes a quad-core processor and a twelve-core graphics processor.  There is also a fifth “stealth” core, that’s used when the device really isn’t doing much to preserve battery power, which is also superb.

The battery is one of the best that I have seen in a mobile device short of a wrist watch.  I have never been able to use my Nexus 7 to “battery death” which obviously is a good thing.  The device is said to be able to watch 9 hours of HD video, 10 hours of web use, and 300 hours on standby.  What I found unique about it is that the battery is actually only supposed to last about 9.5 hours (use was unspecified), but Asus engineers tweaked the tablet so much, they were able to squeeze so much power out of it.

Apps on the Nexus 7 are awesome, especially tablet apps.  The two I have fallen in love with almost instantly are the Gmail and Calendar apps.  These two provide me so much more information that I could have ever wanted or could have ever received from either my laptop or Epic 4G Touch.

The main focus, however, is the size of the device.  Now, while many tablets are around 10 inches diagnally, this one clocks in at around 7.  This isn’t a problem at all.  The device fit perfectly in my hand (Hope Apple doesn’t sue me.  Should have written this review a week ag0).  I find this very useful as now I don’t have to work with a laptop if I decided to surf the net or peruse some apps while watching some TV or playing a video game.

Now as much as I may be branded an Android fanboy, I try to stay objective when looking at devices.  I have used other tablets, both iOS and Android and have used Microsoft’s new tablet UI as their new tablets will be running one version of Windows 8 or another.  Out of all those OSes and layouts, I do prefer Microsoft’s the best because it gives me the best of both worlds, customization and restraint.  Google gives you the customization, but very little restraint (for the most part).

What I mean by that is the layout for most, if not all, modern Android tablets have a distinct look to them.  Since Google released version 3.0 of their mobile operating system which was made specifically for tablets, they have perfected their tablet UI. So I, among others, have wondered why they didn’t include it with their flagship device.  The layout they gave us is similar to their mobile phone.  While it isn’t anything too bad, its not what many people who are familiar with Android tablets were looking for.  However, for people like my parents, who both own Nexus S 4Gs, when I showed them the Nexus 7, they felt right at home as it looked and operated similar to their phone.

There is a way to fix it, but it involves rooting the device and modifying the pixel density in some system files.  This makes the font even smaller, but it does trick the OS into thinking its a 10″ tablet.  This makes me wonder about the OS in regards to other tablets of the same size if the OS isn’t tampered with.  The Galaxy Tab series of devices run what appears to be an unmodified Android OS with its current versions (Tab II) running version 4.0.  I’m afraid that if the 7″ version catches up to the Nexus 7 in terms of Android version, the UI may change suddenly on many users.  I’m not sure of this, and I can only hope that it doesn’t.

This pixel density problem also gives the device a bit of an identity crisis.  As stated previously, the Nexus 7 runs the software equivalent of a phablet.  This means that the apps that you use for the device that may not be the tablet version that you want.  You’ll see this more with the apps that come with the Nexus 7.  While the Gmail and Calendar apps are designed for tablets (among others), the YouTube and Settings apps are still the smartphone version.  While they are the only two that are, it was still a little bit of a let down.  Any other apps that may suffer from that issue are obviously 3rd party apps from developers who hadn’t made a tablet version.

There is one thing that I left out of the good and the bad as its neither good nor bad.  This is the device’s single front-facing camera.  If you haven’t already noticed, the Nexus 7 has no rear-facing camera.  This may be a deal-breaker for many people, but for those people, they need to be hit upside their head by the tablet they are taking photos with.  I think that is worst way to take a picture ever and I’m actually glad that the Nexus 7 doesn’t take part of that nonsense.  The front-facing camera is obviously there for videoconferencing and it works well for what its for.  Taking pictures with it for profile photos or sharing isn’t the smartest thing to do as the photos do not come out great at all.

I guess I can actually place here a mini-review of the case I have for it.  The official case coming out for the Nexus 7 (yes, it hasn’t been released yet) is okay, however, it doesn’t seem to take advantage of a feature that was  secretly built into it.  The Blurex Ultra-Slim Case takes full advantage of it.  This feature is the smart cover-like magnets placed on the side that can detect when something is covering it and turn the screen off and turn it back on when the cover is being removed.  This case fits like a glove on the Nexus 7, gives it a little more weight and also doubles as a stand for watching videos among other things.

For $250 ($200 for 8GB version), the Asus/Google Nexus 7 is an awesome device at that price point (or at any price point for that matter).  The performance is all there and the screen size causes a love/hate relationship as it feels good in the hand, but only somewhat pleasing to the eye.  However, as you can see, the pros clearly dominate the cons and makes the relatively little money that I paid for it worth it.