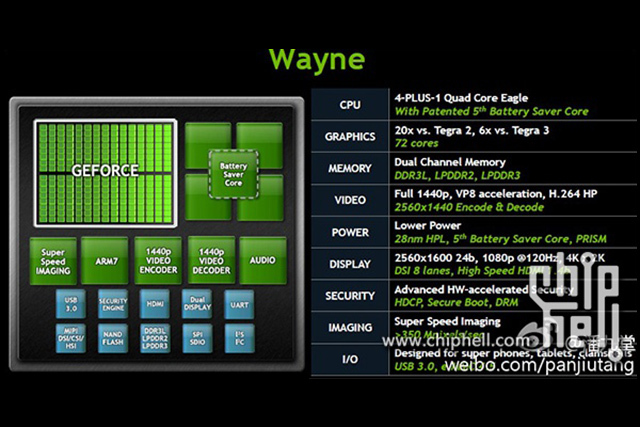 Word coming in from Chiphell is that the next generation Tegra processor from Nvidia is on the way.

The processor, codenamed Wayne, will have the same CPU configuration as the Tegra 3 (4 normal cores with an extra battery conscious core).  However, here its called the 4-Plus-1 Quad Core Eagle, which lends to the fact that it will probably be using the newest ARM processor architecture which was codenamed Cortex=A15: Eagle.

But it wouldn’t be Nvidia if we weren’t talking about some graphics and you sure won’t be disappointed by the news.  The Tegra 4, will be packing six times the graphics processing power of its predecessor.  For those who weren’t keeping score at home, it means phones and tablets will be running with 72 (possibly Cuda) graphical processing cores if the leak is to be believed.

And if you think this will take a toll on battery life, it only gets better.  These chips are rumored to be taking advantage of 28nm manufacturing process which Qualcomm is already using.

With this and others that are listed in the above slide, I can’t wait to get a hold of the device that this thing will launch on…if it exists…