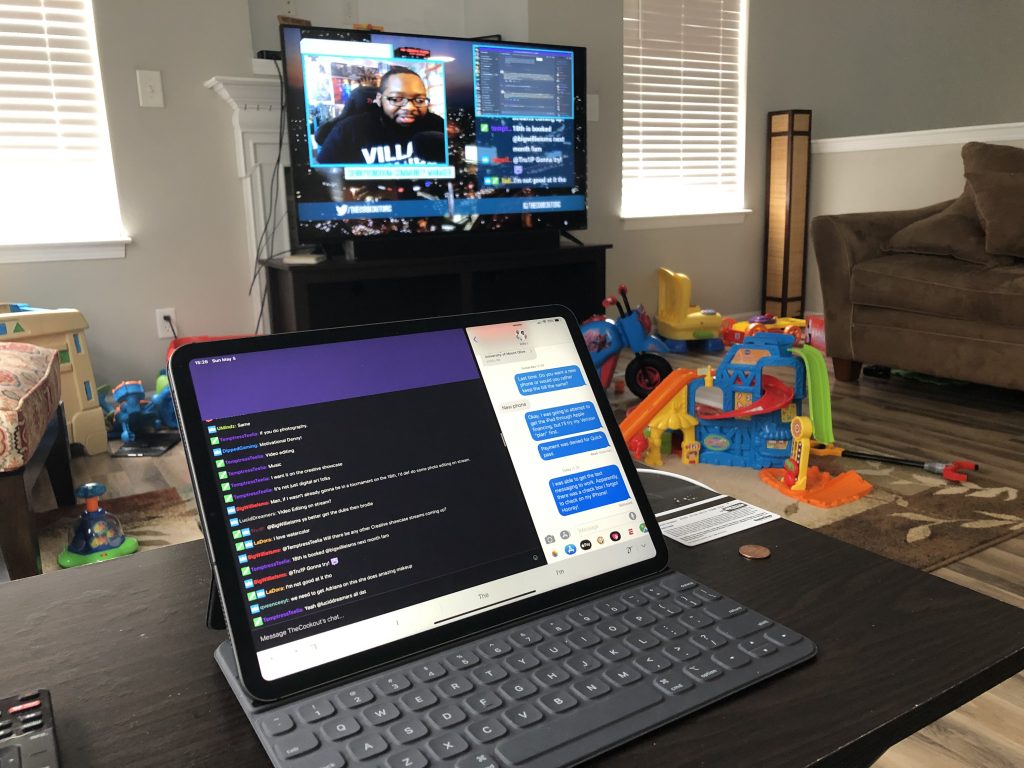 It’s been 11 years since I first set foot into the modern Apple ecosystem, better known as the “Walled Garden.” Back then, I wouldn’t have considered myself a part of that walled garden. I made great strides in avoiding that label. I got really heavy into Linux. I bought, exclusively, Android devices.

Then, in 2013, things changed. In the span of six years, I’ve done the following:

All of this has led up to this moment. Because both my iPad Mini 2 and personal Macbook Pro was starting to show their age, I figured it was time to upgrade. But, instead of upgrading both devices separately, I remember there was one device that had the amazing size and portability of a tablet with the computing powerful of a small laptop.That device is the iPad Pro.

The model I picked up (pictured above) is the 2018 11-inch iPad Pro. This model has 256 GB of internal storage and is LTE enabled. I picked this up through Verizon and was discounted almost $200 since I was updating my wife’s iPhone 7 to the iPhone XR. I picked up the Smart Keyboard Folio the next day. I also picked up the second generation Apple Pencil later on that week. Due to the time in which I picked up the Pencil, my thoughts won’t cover much of it (even though I delayed writing this to get some quick thoughts using it).

These past couple of weeks have been pretty good, but it hasn’t been all sunshine and rainbows. Let’s dive in, shall we?

The first thing you notice with this device is that it’s nearly all screen. Now, while it’s not an iPhone X, Samsung Galaxy S 10, or even the recently announced OnePlus 7 Pro, for an iPad (or any tablet currently available), it has the highest screen-to-bezel ratio of any tablet on the market. All the front facing cameras and sensors are hidden within the bezel and you might have a tough time finding them.

Speaking of the “hidden” sensors, because you may never know where they are, Face ID works in both landscape and portrait. Also, if you are trying to unlock the iPad Pro in landscape, yourhand could possibly be covering the sensors. The iPad will let you know if that is the case, will point to where the sensor is and let you know that it is being obfuscated by something.

Once you’re logged in and ready to work, everything functions similar to an iPhone X in relation to navigating around. One of the best new additions to iOS 11 for iPads are the awesome multitasking features. I missed out on some of these features because they were not available for the iPad Mini 2. Of course, I’m talking about Slide Over, Split View, and Picture in Picture.

While I hardly use Slide Over and Picture in Picture, Split View has been the the absolute best. The second day I had it, I used it to do some routine maintenance on one of my servers while watching the stream pictured above. It was at that point that I wanted to see how far I could push it. Two days later, I sat down and deployed an entire website using nothing but the iPad Pro. In fact, I’m using Split View right now to write this review!

Going back to the physical side of things, the iPad Pro is the second Apple product line and 1st iOS product line to use USB Type C. This was definitely super helpful as it finally gave me a reason to break out my old Nexus 6P cables and chargers. As an “owner” of a 2017 MacBook Pro, it’s nice that I’m able to share chargers with it. Also, this is the first iOS device that lets you charge other devices from it, which is very convenient.

Then, there are the accessories. In order to really get some work done on the iPad Pro, you’re gonna need a keyboard. You can pair any Bluetooth keyboard to it or you can get the Smart Keyboard Folio from Apple. It has a really good, keypress feel for a portable keyboard. It also adds PC shortcuts like Alt+Tab, Cmd+Space for Spotlight search, and Cmd+H to get quick access to the Home screen.

And, in my opinion, no iPad Pro can be complete without the Apple Pencil. The Pencil is now in its second generation and only works with the new iPad Pros. For the naked eye, the tracking is flawless. I’ve been using it while at work to take handwritten notes during some trainings and it works really well to capture my actual handwriting as if I was using pen and paper. Pairing and charging are also super simple. All you have to do is magnetically snap it to the side of the iPad Pro.

Now, I hear you all asking: “But it can’t be all sunshine and rainbows, right?”

And you’d be absolutely right!

Let’s start off with the Apple Pencil. I’ve had some issues with it when writing. While it does track very well, it doesn’t do it 100 percent of the time. There are times when it glitches out and stops writing. I don’t know if this is a Notes app issue, but I found myself having to back out of the note I was writing in and coming back to a working Pencil.

Sticking with the Apple Pencil, you may want to pick up a carrying case for yours. While it does attach magnetically to the iPad Pro, it’s not a real permanent solution. I was able to shake the Pencil off the iPad, but I had to really shake it. However, the real issue is in transporting the iPad Pro and Apple Pencil. I feel it would be really easy for the Pencil to come right off. So, you might want to invest in something like the Belkin Case + Stand.

Switching gears over to software: There are some big glaring omissions when it comes to iOS on it’s tablet side. The most glaring issue is the lack of mouse support, especially for the iPad Pro. For this to be their professional tablet, it’d be nice to see them add it.

For the hardware they do have, there seems to be some issues with it when combining it with the software. Some applications don’t “respect” the presence of the physical keyboard. There have been countless times where I open an app and the virtual keyboard just takes over a good chunk of the screen.

Then, there’s the UX, also known as the user experience. While I’ve become very familiar with the gestures on my iPhone X, these gestures combined with the gestures that were specific to iPads can become quite a nuisance. There are three different actions that happen when you swipe your finger from the bottom of the screen:

This becomes an issue as you’d have to be near perfect in moving your finger (and only your finger, the Apple Pencil doesn’t work here) to get the desired effect.

Then, there’s the overall price. Now, I’m a big gamer, so I’m going to share this little meme to explain my point:

While still coming to grips that the base price for an iPad Pro starts off less than an iPhone XS ($799 (WiFi) or $949 (cellular) vs $999), it’s kind of an intriguing prospect. However, when you factor in the additional costs of a keyboard ($179) and Apple Pencil ($129), it starts to add up. And, no, you can’t use the cheaper Apple Pencil 1st Generation ($99) on the newer iPad Pros. You can do fine without these peripherals, but you can also pick up cheaper laptops with proper multitasking and mouse support.

For someone who wasn’t really setting out to frolic in the “walled garden,” I’ve enjoyed my time with Apple and their products over the past few years. It’s not because I believe Apple is the best. They’re far from it, especially given my beliefs in Free and Open Source software and support for “Right to Repair” legislation. For me, Apple is a company of convenience at a time when I’m spending time supporting other people’s tech and working on big projects and don’t want to be hampered by the client devices I use to work on them.

I know what I’m getting into when I go the Apple route. I know my wallet sure does hate me for it from time to time. There are times I do get frustrated by it’s limitations. However, I know the devices, software and services Apple provides serve a particular purpose. It’s why I still run Linux servers and still game on a way more powerful Windows PC. It’s why I look to Android to assist in serving content in my office.

The iPad Pro is by no means a necessity item for those who won’t portable power. There are other devices for that. For me, it gave me the ability to consolidate some equipment and a new perspective on how I experience technology and the world around me.For its shortcomings, I’m glad I picked up the iPad Pro and am hoping this becomes my new daily computing driver.