Did You Hear what Herd Said? 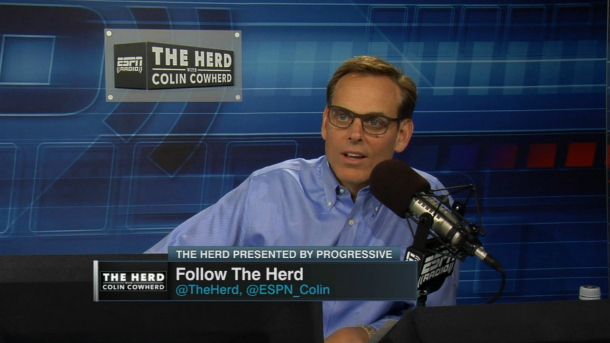 While going through my news feeds this morning, I came across a few articles that sprung up about Heroes of the Dorm, the, in my opinion, lazily named Blizzard Heroes of the Storm college tournament, that was aired on ESPN2 this past weekend. Unfortunately, none of them were positive as they seemed to center around one Colin Cowherd. He is an ESPN Radio personality (because I feel that sports reporter is too strong a term for him) whom I’ve only seen a couple of times on random ESPN programming.

Essentially, what went down was that he proposed during his radio show, The Herd (which sounds like “Ya Heard? With Perd”), yesterday. He stated that he would retire if he had to cover video games for ESPN. He then proceeded to insult the gamers, the announcers for the event and anybody who may have tuned in to watch the event. He then proceeded to use a sound clip from “Revenge of the Nerds“. You know the one…the one that shouts…NERRRRDSSSSS!!! Yeah, that one. Kinda cliche, right?

So, here’s my thing. He’s absolutely right. He should consider retirement if he’s forced to do something he doesn’t want to do. I mean, if you were paid comfortably to do what you like to do and suddenly asked to do something you don’t, you shouldn’t have to do it. The only thing you can do is leave, right? But that’s where he should have stopped. I can’t say he doesn’t have a right to speak his mind on how much he dislikes video games, but to insult a another person or group of people and then use tired tropes to describe said people? C’mon, son!

But what can you do? Here’s some powerful media figure who has “inadvertently” caused DDoS attacks against a smaller site. I mean, sports fans can be a very ruthless bunch… Better not piss ’em off…

So, what do you guys think? Should Disney stop showing eSports on ESPN? Do you think its time for Cowherd to hang it up? Let me know in the comments below!

Featured image courtesy of and information sourced from GameInformer.com