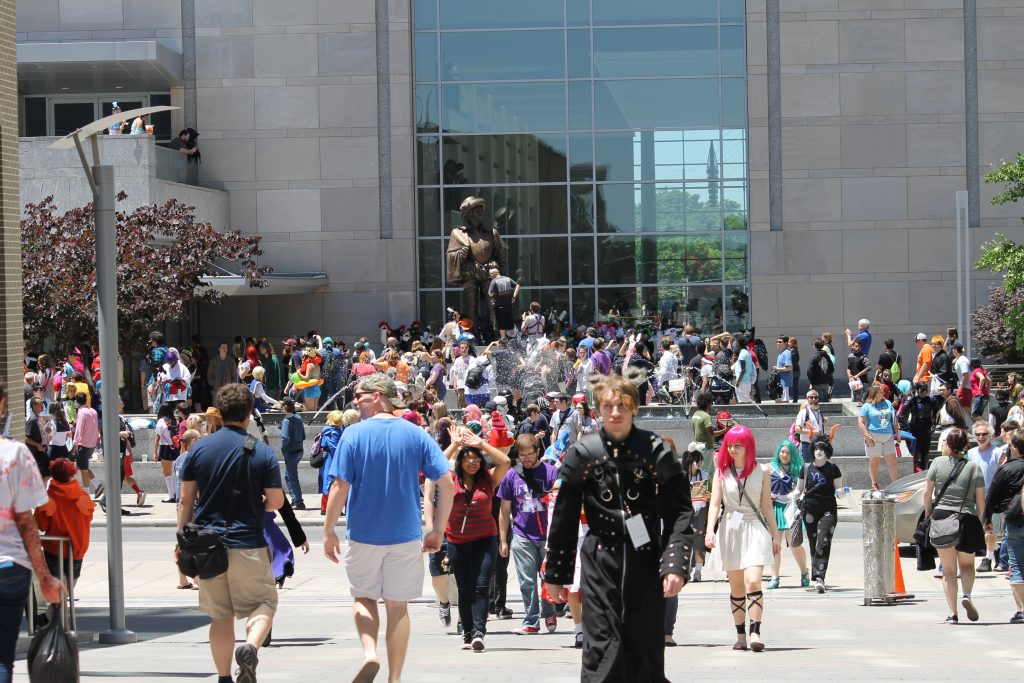 This is my first Animazement which is sad since I’ve lived in North Carolina nearly all of my life (short of the 3 months I lived in Illinois) and since I’ve known about its existence four about 4 years.

Animazement is an anime convention that is held in Downtown Raleigh in May.  I believe it is toward the end of the month. To be even more specific, it may be held on Memorial Day weekend. It goes from Friday until Sunday, but this year they had a little preview event that was held on Thursday evening.  I’m not sure as to what happened then or what even went down on the first full day Friday, but these are the things I observed on Saturday.

On Friday, I had this brilliant idea that I was going to try to arrive super early so that way I could beat the crowd.  So, on Saturday, I got up at about 6:15am, took my shower, got dressed and assembled my gear (laptop, camera, lenses, tripod, tablet, Vita, and 3DS (gotta get them StreetPasses)). I kissed my wife goodbye and set out on my journey which included breakfast and Bojangles and a lot of nerdcore dubstep (thanks Totentotz and Grimecraft).

At 8:20am, I arrived and paid for parking then grabbed enough of the equipment I needed for the walk-around. I, then, began walking towards the Raleigh Convention Center only to discover that a line had already formed and had started to wrap around a corner. I took my place in line and began my wait. I met another photographer who seemed a lot more prepared than I was and actually made a business of photographing cosplayers.  While we waited, he dashed around taking photos of random cosplayers as they headed to the back of our line.

At 9:00am (or a little after that), the doors had opened and the line began to move. Luckily, the staff running the registration tables were “experts” at their craft and kept the line moving very quickly.  I was glad that there was a credit card table as I started to fear they wouldn’t take mine as soon as I got through the door.

Upon, entering the convention center (still in line), I had noticed the setup that they had various stations set up. Obviously, there was the one for at the door registrations. Off to the right they had several such as information booths, 18+ passes for more mature panels and parties, and weapons checks. I believe it is the first time that I had seen a weapons check station. I’m sure they had one at MagFest, I just may not have noticed it.

After taking care of my necessary passes, I went through the gates and this is what I saw…

If the Titans Attacked…

Well, if Saturday was any indication, Attack on Titan had to have one Anime of the Year or at least the New Hotness award. As I’m only two episodes into the series, I only have very limited knowledge of the series, but it was explained to me that everyone was cosplaying as the military from the show and not one particular character. This makes it a lot easier to explain why there were so many of them and probably didn’t bother to go any further than the uniform. That cosplay concept was actually very new for me and was a very interesting take on an interesting problem. The only other time I saw the problem tackled in such a way is when the 501st shows up.

However, I wasn’t there for that.  I was there for all of the unique cosplay, and the convention attendees did not disappoint. Even though it is an anime convention, there were more than just anime cosplayers there.  Some came as various video game characters. Others came as characters from comic books. I guess it kinda helped that The Amazing Spiderman 2, X-Men: Days of Future Past, Captain America: The Winter Soldier, and the new Batman/Superman movie have all been on people’s minds in the past few months.

Then, there were the obscure anime and manga references.  I could tell you that I learned of new anime to watch or manga to read, but most of the series that I learned about were still in Japan and most of the diehard fans in attendance were problem reading and watching fan-translated versions which were the norm back in the 90s when I started. As of late, I have become lazy and have relied on production companies and professional translation services.

What are you buyin’?

For me, a convention is only as good as its dealers’ area, and Animazement didn’t disappoint. The dealers’ area here was packed full of various vendors selling their wares (and wears (see what I did there)). They were selling everything from hats to kimonos, replica weapons to real ones…very real ones.  There were a few items that I wanted to pick up from the event, however, like most things I go to, it happens to be on a weekend I don’t get paid.

It looked really busy and was very packed in the area and I can only guess that it was that crowded Friday and Sunday as well. I’m not sure if it was as busy for the dealers as it looked. Didn’t want to ask about it when I wasn’t buying anything myself as I overheard one dealer that they weren’t big fans of people stating that they didn’t happen to have money this weekend. After hearing that, I quietly stepped away…

Now it’s time for so long…

While there were some small things that made me kinda regret going (which I won’t acknowledge here or at all), the event was mostly a very enjoyable experience. I would love to go to more of these events and maybe learn more about the anime and manga that is out there that I am far from knowing of or even understanding.