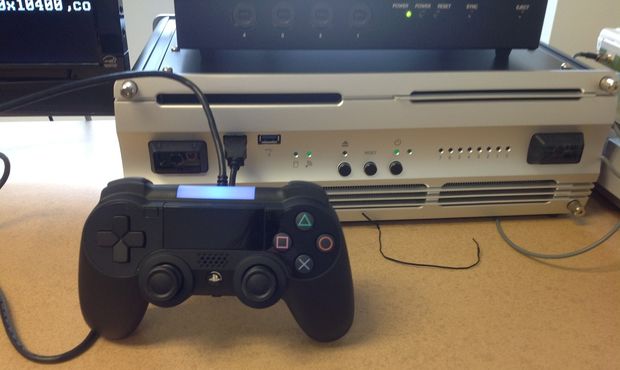 Apparently, some people couldn’t wait for the 20th to hit.  Over on Destructoid (and just about every other site on the planet), a picture has surfaced with what appears to a prototype of the new controller and a development kit.

It sports a touchpad similar to what is on the back of the PS Vita with a D-pad to match.  The analog sticks have also gotten a reworking as well.  It appears to be a speaker on the controller which may mean there could possibly be a mic on it.

The one thing about the controller which is severely off-putting is the blue light on top of the controller.  Many people are speculating that it may be a PS Move-related thing.  I, for one, hope it isn’t and am hoping that the light may serve a purpose for the dev kit.  Its kind of hard to think of how you could possible use this or any other Dualshock controller in a PS Move capacity other than as a source of navigation if you couldn’t spring the money for a proper Move navigation controller.

It has been confirmed by multiple sources that this is indeed what the next controller may look like, which leads a lot of people (myself included) that this is actually a prototype.  I don’t mind the Dualshock shape because it works for me, but I hope this isn’t the what they stick with come February 20th.  If so, maybe I’ll switch to the Xbox 360 controller.  It doesn’t look that bad.  And it isn’t as bad as this one, remember…